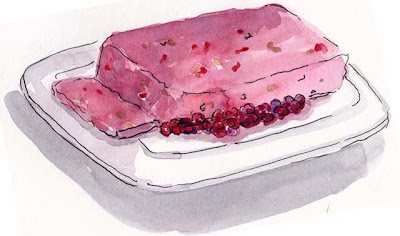 I suspect every American family has a holiday recipe which includes a very unwholesome ingredient made by Kraft Foods, General Mills or some other corporate food producer. Maybe it’s something with lime green jello in it, or a cake mix full of preservatives. Perhaps Lipton soup mix is a main ingredient or it has marshmallows on top. You know the one I’m talking about. It’s a throwback from the 1950s and family members refuse to give it up.

In our family, that dish is Artic Freeze, a creamy, tart frozen concoction with walnuts and whole cranberry bits in it. I serve slices of it on a plate with a serving of homemade fresh cranberry sauce. If I omit it from the Thanksgiving menu, there’s a lot of whining around the table. Most of the ingredients in the dish are okay. It’s a blend of whole cranberry sauce, cream cheese, shredded pineapple and walnuts. Not too bad, so far, right? The killer ingredient? COOL WHIP. According to Wikipedia: “Cool Whip is made of water, corn syrup and high fructose corn syrup, hydrogenated coconut and palm kernel oil (CPKO), sodium caseinate, vanilla extract, xanthan and guar gums, polysorbate 60 (glycosperse), and beta carotene.”

Cool Whip is pretty creepy used by itself as a dairy-like topping. (I always think of it as soft edible plastic.) But when it’s blended with all those other ingredients it actually looks and tastes like real food. I have in the past substituted real whipped cream for the Cool Whip. It was okay, it worked with the recipe, but it just didn’t have quite the right texture.

It would be a bad thing if I ate Artic Freeze everyday, but I’m sure once a year is fine. So I’m off now to add the ingredients to my Thanksgiving grocery list. And I'd love to hear about your favorite recipe, too...

Happy Thanksgiving!
Posted by Sharon at 11:07 AM 14 comments:

With the exception of pumpkin (as in pie) I never eat squash. I believe squash really exists to provide an inexpensive front porch decoration during the months of October and November. I do, however, have great appreciation for their aesthetic beauty and always enjoy seeing them piled in colorful mounds at the fall farmers market. Their odd, beautifully colored shapes are wonderful to look at… and paint. I know the names of some of the members of the squash family - butternut, acorn, turban, but there are many kinds of squash whose names were unknown to me. That changed last week after the Oregonian newspaper featured a squash photo spread in the food section.

And now I know the names of all that squash piled on my front porch. 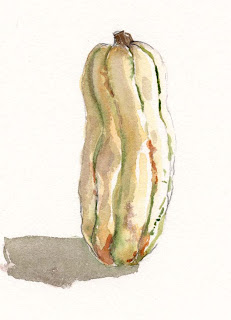 Delicate - According to the Oregonian, " This variety is unique in that the skin, provided it's cooked long enough, is thin enough to eat, and the nutty, creamy flesh has notes of corn and sweet potato. Best when baked or steamed; not as good for soups." 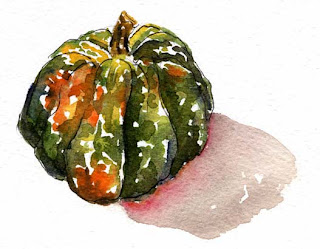 Sweet Dumpling - "A winner. Sweet and nutty with a super-creamy texture. Skip trying to peel those small ridges and just cut it in half and bake." (Personally, I think the name of this one should be "camo.") 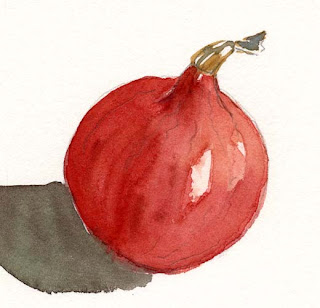 Kuri- "Also known as Japanese squash, orange Hokkaido or uchiki, kuri squash is similar in texture to the butternut; red kuri is smoother, with a distinct taste of chestnuts."

I'm dedicating this post to my wonderful daughter-in-law Aimee, who apparently can never get enought of this stuff, since her freezer is full of jars filled with squash!
Posted by Sharon at 10:54 AM 10 comments: 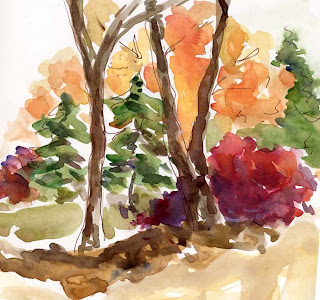 I was getting ready to put my paints away and close the curtains for the evening when I noticed these colors outside. Most of the trees around our house are naked now, but there are a few bushes and trees that refuse to give up their autumn finery.
Posted by Sharon at 4:50 PM 5 comments:

Today is the day we get our country back! 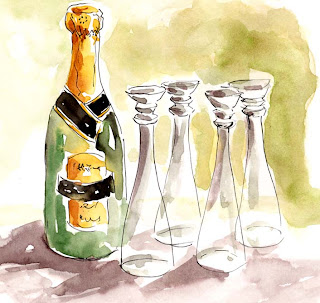 The champagne is chilling. The flutes have been washed. Our friends are joining us this evening for dinner and election returns.

We tried this four years ago and it was a bust. But I'm thinking tonight we're going to have better results.

And I'm really looking forward to not having to cringe every time our president opens his mouth.
Posted by Sharon at 7:03 AM 11 comments: 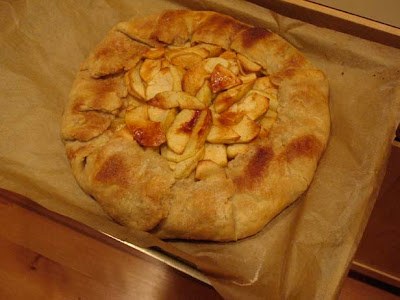 Apple galettes are the quintessential fall dessert. Mine always taste good, but they are often rough and mishappen in appearance. Today I made a pretty galette. (Actually, I guess the apples should have been arranged in concentric circles.) But still, I had to share...
Posted by Sharon at 5:41 PM 3 comments:

Art is transferring feeling from one heart to another.  - Leo Tolstoy

I saw a bumper sticker on a car once that said ART SAVES! At the very least, art transports. There's a wonderful meditative quality when one is totally immersed in the present moment, working on a drawing or painting. It is both energizing and intoxicating.

Thanks for stopping by. I welcome your suggestions and critiques.

If you don't see your blog here...

It's probably bookmarked by me elsewhere...there are so many wonderful blogs that I visit and enjoy, it is impossible to list them all.

"The flat sound of my wooden clogs on the cobblestones, deep, hollow and powerful, is the note I seek in my painting." - Paul Gauguin